Well, the Bothy ride did take place and Tim Luke and I survived, despite our spouses scepticism. We set off for the bothy and quickly noticed the additional weight of our kit including 3kg of coal (each) as we puffed up the gentle gradient. My bike weighed 19kg and back pack another 10kg. I was also experimenting with my 1×9 set up, so I was struggling more than usual. 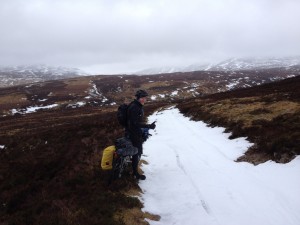 Once beyond the trees we were coming across patches of snow and then the patches of snow joined up. The snow had filled up the double track so it was easier to cycle across the heather. Who needs a fat bike anyway? We were just getting into our stride and we found ourselves descending down to the bothy a couple of hours later.

climb up from Bridge of Tilt 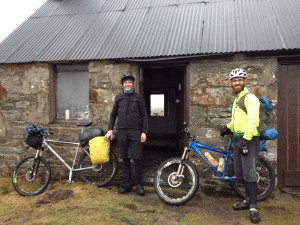 We had a quick tour of the bothy, one room with 2 platform beds, open fire and a kitchen table, the other half of the bothy was a work room and there was sleeping loft above the main room. With a couple of hours daylight we decided to head up towards Beinn Dearg. It was good to ride with out all our gear but we didn’t get very far before we were back into the snow.

We had a quick tour of the bothy, one room with 2 platform beds, open fire and a kitchen table, the other half of the bothy was a work room and there was sleeping loft above the main room. With a couple of hours daylight we decided to head up towards Beinn Dearg. It was good to ride with out all our gear but we didn’t get very far before we were back into the snow. 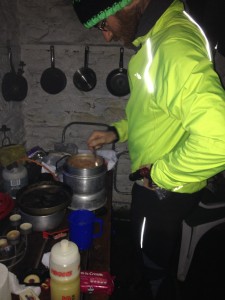 Back at the bothy after a quick change into dry clothing, Tim was on a mission to get the fire alight, we then had to dry the coal out by spreading it around the floor near the fire. By this time we were getting thirsty, so we thought it best to eat first before cracking open the hip flasks.

So this time Luke springs into action and produces a tasty 2 course pasta dinner. So with hip flasks open we came to the main event of the evening. Atkins top trumps bridge structures. Sadly quite competitive for Tim. By this time 10.30pm, we were beginning to ration out the coal for the rest of the evening and chat revolved around bike love. But things were about to change. A light was approaching. Turns out it was a Munro bagger and his pooch, complete with a bag of coal. But not just any coal it was normal coal, far superior to my smokeless tat, apparently. Turned out he is more of a ultra fell runner and knows Dawn and Matt. So the banter continued late. Eventually there comes a time we you can put if off no longer, the call of nature, (it was blowing a gale and wet), before hitting the sack, or in my case the stone cold damp floor. My choice, age before beauty. Needles to say it was along hard night. My thermarest and sleeping back are clearly not upto winter bothy nights, eventually I was wearing all my dry clothes including my puffer jacket. I dont think Tim fared much better but the whisky did the trick for Luke and he missed my snoring.

We were woken with Mike? getting the fire going . A plateful of porridge later, Luke suspicion were confirmed, he had a flat tyre. But how do you get a flat tyre with tubeless? Let the sealant dry is the answer! To add insult to injury further humiliation followed  when he found he had the wrong spare tube valve. By the time we were ready to leave, it was snowing heavily, so we decided to head up to Bruar Lodge via a singletrack then cross the river and head back down the glen. The singletrack was more of a stream bed and heavy going up hill though the snow. Once we reach the watershed our progress was quicker. Too quick it turned out. When we got to a stream crossing, Tim noticed that he had jettisoned his pannier. We retraced our tracks and Tim was re-united. We reached the Lodge but weren’t invited in so we shared jelly babies and chicken wraps and headed down the glen, into the wind and snow. Our attempt at a road train was thwarted as we all suffered frozen high gears. Not a high point. We avoided a wrong turn and head over another river crossing keeping our feet drying surprisingly. Another Jelly belly and sausage stop and we decided to head straight back to the car rather than House of Bruar. We rewarded ourselves with a pint in elsewhere but the Bothy Bar.

Would we do it again? Yes

Would we do it differently? Yes 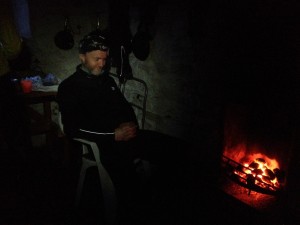 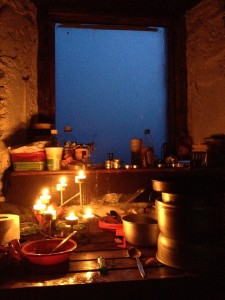 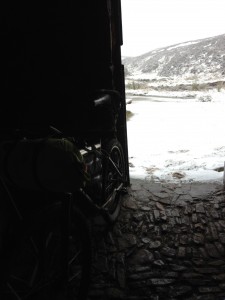 Sunday’s view from the Bothy 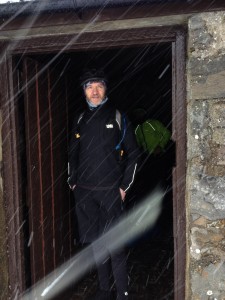