If you’ve ridden at Comrie Croft you’ll know there are some great manmade trails but there’s a whole lot more to explore if you dare to step out beyond the trail centre (photos courtesy of Al D.) 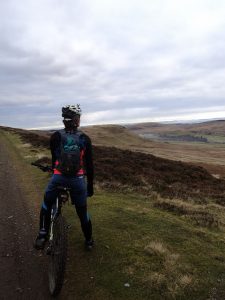 It was a fairly grey, chilly day in Comrie but the trails were dry and the spirits were high.  7 of us left the Comrie Croft car park for the stiff climb up behind the trail centre.  The route climbs up quite stiffly on good quality fireroad and the pace was fairly brisk which helped keep us warm in the cool air.  Once up on the hillside we had great views down into the Strathearn valley with broken sunshine trying, and failing, to burn off the mist clinging to the valley floor.

The route undulates its way to a reservoir where Nigel opted to take the tarmac shortcut to get back to Comrie.  The rest of us continued along the trail, passing behind Crieff with views towards The Knock, where we’d be riding a short time later.  There’s nothing hugely technical on the route but some of the fireroad descents were fast with a few sketchy corners.  A short time later the adrenalin was pumping again but this time it was because we were watching Al ride over a scenic old bridge with the potential for a big fall from the top into a fast flowing burn below.  There’s nothing like the sound of someone struggling to clip in & out while trackstanding on a narrow bridge over a big drop to give you the heebiegeebies! 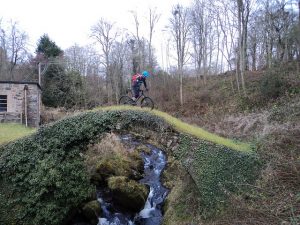 Anyway, Al survived and we refuelled on Elizabeth’s homemade ginger cake before heading up onto the The Knock to find some of the local trails.  They’ve been busy and there’s a wee network of blue, red and black graded trails with some nice features like big berms and a few drops.  It was nice to mix in some trail centre type riding on a mainly natural ride and definitely worth coming back to explore with a bit more time.

By now energy levels were depleted so a quick blast into Crieff was followed by a game of Hunt The Cafe.  We finally opted for Cafe Yum Yum.  With a name like that it was either going to be really bad or really good.  Happily it turned out to be the latter.  Soup, panninis, stovies and hot drinks in a warm and friendly atmosphere.  Job done!  After that our damp bodies had to get warmed up for the next leg of the route and with the light beginning to fade we’d have to keep an eye on time.

Luckily the next piece of trail has a bit of a climb to get warmed up on and it took us back into the Strathearn valley along a ridge looking out towards where we’d ridden earlier in the day.  Deep carpets of beech leaves concealed cheeky roots and rocks lying beneath.  The trail undulated and flowed its way along the hillside revealing more of the hillside to the west of Comrie in the distance.

At the end of that section it was decision time – commit to going back up into more hills or bail to the car park?  Given the time of year it was rapidly getting towards dusk and returning to the cars would mean a section of busy A road so we opted to get back before it was too dark, and let’s face it 40km and 3200feet of climbing & descending probably counts as a good day out!  I reckon a return to the area will be on the calendar for later in Spring when we have more light to take in the rest of the “megaloop”.  The rest of the route has some more great scenery, a couple of fun descents and another great cafe stop.  It’s amazing what you can find when you go Beyond The Trail Centre 😉

Here’s more of Al’s photos from the ride: 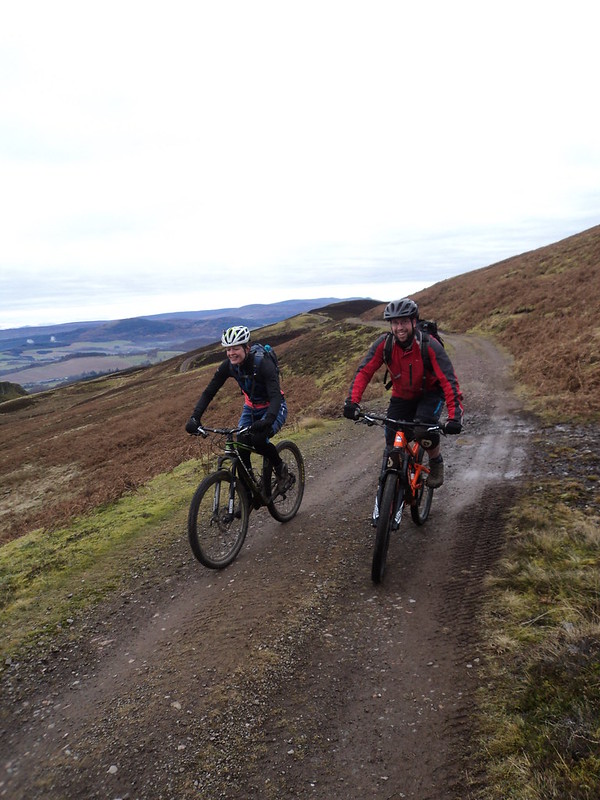