It’s a ride I’ve always wondered about doing; through the Old Kilpatricks via Duncolm.  The recent dry spell of weather meant it would be the perfect time for having a bash at it.  And so, maps, satellite views and old GPX files were consulted and a plan was hatched.  What about the weather?  The forecast was for increasing cloud.  Ahh, keep the base layer, ditch the suncream then.  Big mistake….

I can see the pub from here….and by that I mean the Oak Tree Inn in Balmaha

We headed off up the usual Windy Hill climb (aka the Clyde Coastal Path) and were able to soak in a clear, cloudless sky pretty much as far as the eye could see.  So much for the predicted cloud rolling in.  The last time I was on this trail was back in the middle of February and it was soaking wet.  What a change!  We caught great views over to Dumgoyne before we headed along the next bit of the Clyde Coastal Path towards Faifley & Cochno.  A bit of navigational faff and well intentioned route suggestions from locals saw us taking a roundabout way to get onto the path up to Greensides Reservoir.  Which is a fancy way of saying I got us a bit lost 🙂 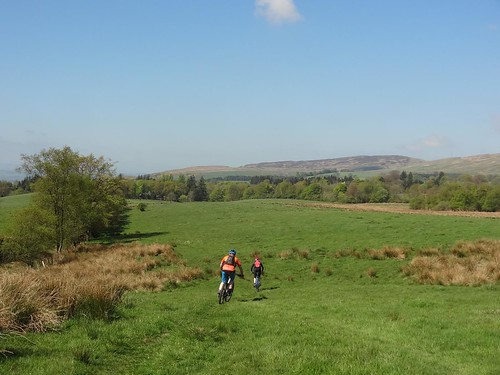 The sun was in full swing by this point and the dusty gravel track up to Greensides was lined with stunning yellow gorse.  A wee break at Greensides allowed us to work out the preferred route over the Old Kilpatricks and we plumped for the Slacks to Humphrey to Duncolm option rather than via Jaw and Kilmannan reservoirs because we’d not been over Duncolm before and, well, it seemed like more fun. 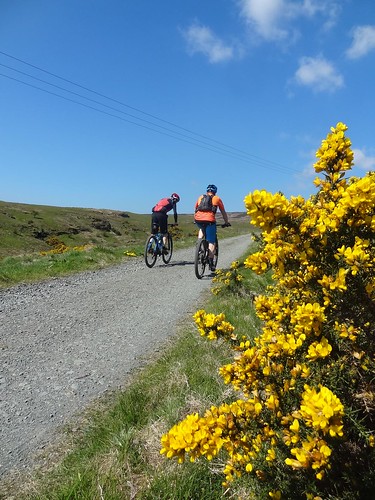 A steep climb up took us up above Greensides really quickly and onto some lovely, dry, flowy moorland singletrack over to Loch Humphrey.  I’d had this idea that we’d be rugged exploring types, bravely charting unknown territory into the depths of the remotest Kilpatricks only to notice that the whole population of Clydebank (it seemed) was up in the hills walking about in their gutties and gym gear.  It didn’t matter, we were still heading off into the unknown.  I’ve always wanted to do a route across the OK’s via Duncolm, one on my to do list.  It’s a big missing link in my mental trail map and it’s on the doorstep so no need to drive dozens of miles to explore it. 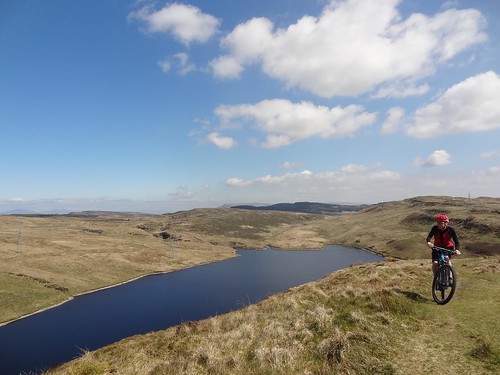 We ploughed on over the moorland following a less distinct but still visible quad track until we were confronted with the almost circular volcanic plug that is Duncolm. A steep push followed.  But hey, we were intrepid explorers heading out into the empty, wide open space, so no big deal.  Imagine my surprise when we reached the summit to find we were gatecrashing a family picnic and lots of other intrepid ramblers had made it there in the “taps aff” weather.  But, as Neil’s expletives exclaimed, the view was indeed amazing.  You could see for miles, Arrochar Alps, Loch Lomond & Crianlarich Hills, Trossachs & beyond, Dumygoyne & the Campsies.  Properly stunning. 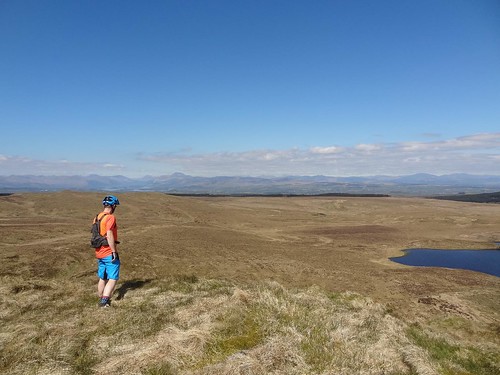 Now for the descent/walk/heather bashing down the other side.  Yeah, steep in places but soft landings.  And some mud – with Neil managing to soak his foot in a boggy section.  You have to wonder what this area would be like in “normal” Scottish conditions – tough going. 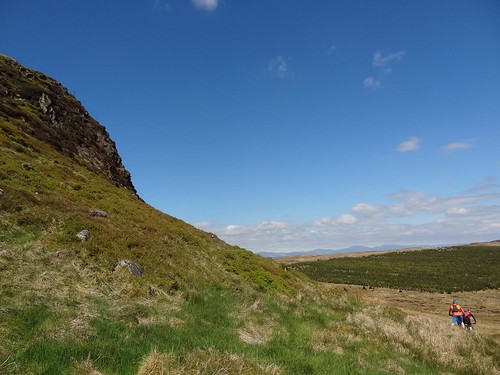 We eventually made our way towards Burncrooks and it was decision time again – The Whangie or a bacon roll, hmm.  Being about 2pm and sensing tired legs we opted for the bacon roll & cake stop at Eden Mill cafe.  Thankfully the hoards of day trippers got stuck at Mugdock and never made it to Eden Mill so there was no queuing and amazing breakfast rolls & cake all round. 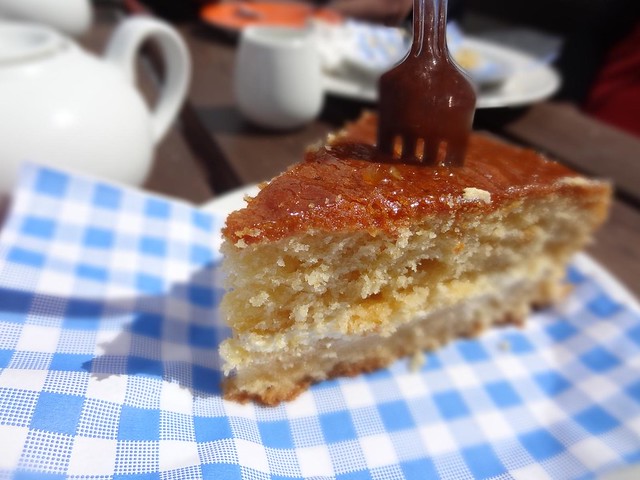 We were starting to feel a bit frazzled by all the sun now and with time marching on it was back onto familiar trails of Carbeth, WHW and Riverside.  But the scenery wasn’t quite finished.  Riverside is running beautifully just now, the lush trees and grass, carpet of bluebells and dappled sunlight looked amazing.  We’d been saying it all day; “stunning weather” and it was still true.  It might be the last time for a while there’s the conditions for a long Sunday ride in the sun which made me all the more grateful for the great weather, scenery and some great company from Stuart, Neill and Scott. 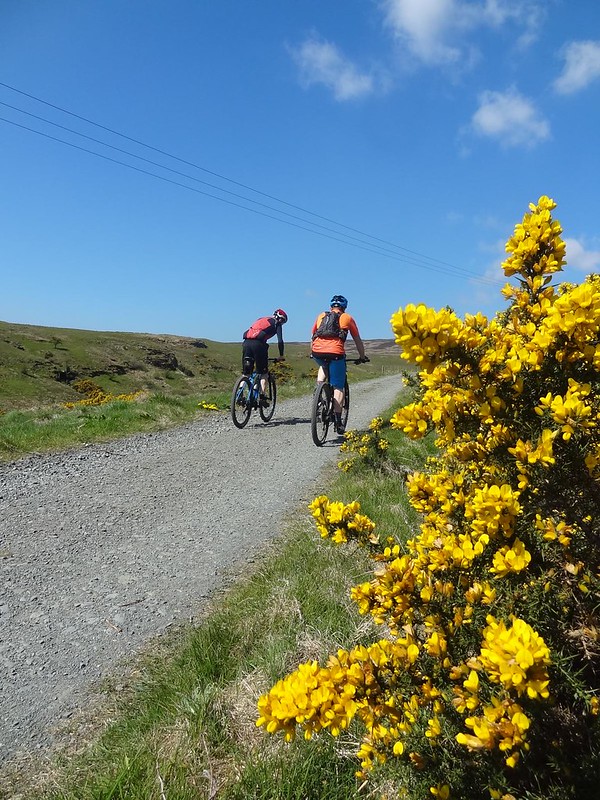