By Ryszard February 4, 2011 February 4, 2011 Routes and ride reports
So, ended up just me and Andrew (Hirst) getting to Drumlanrig a little after 10 on Sunday. aiming to do the Wanlockhead Gold Rush route from Andy Mac’s little book o’ trails (http://www.amazon.co.uk/Bike-Scotland-Trails-Guide-Mountain/dp/0955454808/ref=sr_1_1?ie=UTF8&s=sports&qid=1274135360&sr=8-1-spell).  Forecast was pretty good, although clouds were looming as we drove over from the motorway, trying not to collect any lambs on the way.  Entrance to the grounds is now £5 a head; yeah, seems steep, but you do get to use the facilities (toilets, showers, bike wash), and there’s a stately pile to maintain, so I’ll not complain too much.  We were treated to the sight of Rik and another riding a /side-by-side/ tandem up and down the car park, wobbling ominously, as we got kit together.

First part of the route is the red, and the trails were running as beautifully as they always have.  The only thing of note is that there has been quite a bit of trail building since I was last down, and not entirely to my taste; berms and jumps transplanted over what was in some cases very sweet, fast, flowing singletrack.  I guess that it’s what people now expect courtesy of the Seven Stanes, but, in my opinion, is not in character with the rest of what I always thought a hidden gem.  I’ll reserve judgement until I get to ride the lot, though; it won’t put me off going back sometime this summer.

Progress seemed slow, as although we were clocking up distance, the twisty nature of the trail meant that on the map we didn’t seem to be getting very far, but eventually we found the point where we left the red.  The book describes it as being after a section known as “Dr Evil”, which isn’t too helpful, but you will know it when you find it; the section is the most interesting up to that point, and while the red makes a sharp turn up a rough road to the right, you need to head left, downwards and towards the River Nith, which is hidden at that point.  I’d give a grid reference, but the GPS wasn’t too happy with the tree cover. 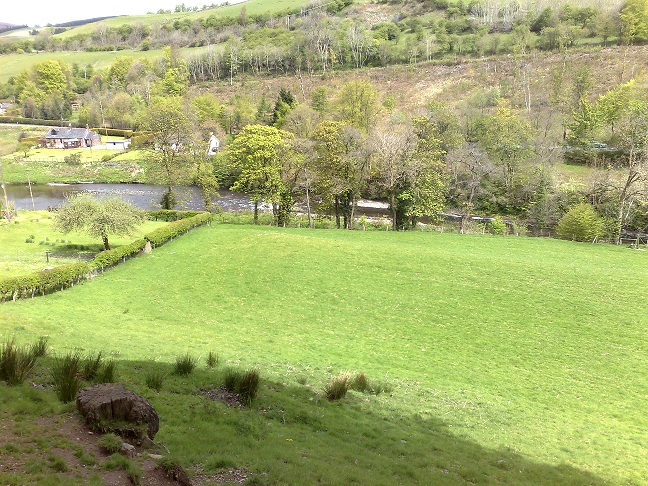 Next bit is a good blast along LRT to a lovely vista overlooking a couple of idylically sited houses (complete with happy looking woofy dog and a woman waving to us) where you carry on along the river through a gate, ignoring the track doubling back on itself up the hill.  The gate had a sign warning that the track was impassable to vehicles due to a landslip – we just hoped it was passable by bike!  The trail up to Burnmouth has stunning views of the Nith, eventually I stopped for a good look after catching a wheel in a rut whle paying more attention to the surroundings rather than the trail.  Andrew spotted an oyster catcher flying past, striking with black and white plummage.  The landslip, while impressive, was no obstacle, and before too long we were at Burnmouth, where we left the LRT and were back on a metalled road to Eliock Bridge, where we stopped to grab some food, taking advantage of a bench put in place in memory of a member of the local angling club dedicated to “clean waters and clean sportsmanship”.  I dread to think what skulduggery may take place in the angling world…  While stuffing our faces, we saw a group of five mountainbikers that we had passed in Drumlanrig carrying on in the direction that we were soon to head off in, and wondered if they were out on the same ride.

By this point we had covered about 18 miles of an estimated 30 plus, and had been on the road for 4 hours.  I was starting to think that we’d be finishing a little later than we’d reckoned for…

Over the bridge, turn right, and a click or so down the footpath running along the A76, before turning left up the hill towards Mennock.  Map showed us needing to take the first left; first left lead to a fenced off field with a big sign saying “Beware of the bull”.  Ah.  Looking at the map again, the road that we were after thankfully wasn’t up there but a little further up the hill (of course).  After a bit of a stiff climb, things levelled out, and progress along the LRT was only impeded by a series of gates that must have featured in the Krypton Factor, as each one seemed to have a unique and fiendish method of being secured that eventually resulted in me declaring “sod this” and climbing over.  The clouds were now starting to loom a little again, but the weather held as we pedalled on toward the point were we met the Southern Upland Way at Bogg ;~)

The Southen Upland Way section started out as a wide hard pack track, slowly got more grassy, and deteriorated to not much at all about the same point as we got to a field of cattle, with all the big ones munching hay from a feeder to the left, the little ones standing over to the right, and the path going slap bang between the two.  Discretion being the better part of valour, and cowardice the better part of discretion, we valiantly skirted the whole lot by going around the field, a choice that seemed to make the cows a lot more relaxed, and nipped over a stile.

The trail now was defined but just single track through grass, and soon we hit the first push of the day.  Once up, though, the view started to open up, giving a real feel for the distance that we had covered, and still had to go.  The ride to Cogshead was huge open moorland, with a big grassy descent that left me trying not to think too much about the climb out the other side.  Turn right, carry on up the Southern Upland Way, and sure enough: hill.  Granny ring, lowest gear, spin away, and really appreciate the fact that the new Five climbs like a rat up a drain pipe.  It was a tough climb, but the reward is the descent to the lead mine on the trail to Wanlockhead.  Wide, grassy and rocky, a couple of switchbacks, time to let go of the brakes and go hell bent for leather.  Andrew “What’s that smell?”, both “Ah: burning brake pads!”.

After a brief stop to look at the beam engine and remains of the minature railway, which has seen far better days, we got to the visitor centre tea shop at 1627, 3 minutes before they were to close.  The five guys that we had seen earlier were just leaving.  The staff very kindly served us, despite a Laurel and Hardy sequence where we were both frantically searching for money, and after 20 minutes we were refuelled and on our way.

Things you need to know about Wanlockhead:  arrival, it’s like something out of a John Wyndham book – no people, just sheep staring balefully at you, and signs creaking ominously in the wind.  As you leave, you get buzzed by locals on trail bikes and quads.  We had to stop for a bit of navigational shennanigans, ended with the comment “let’s just head before this turns into a bad horror movie”. 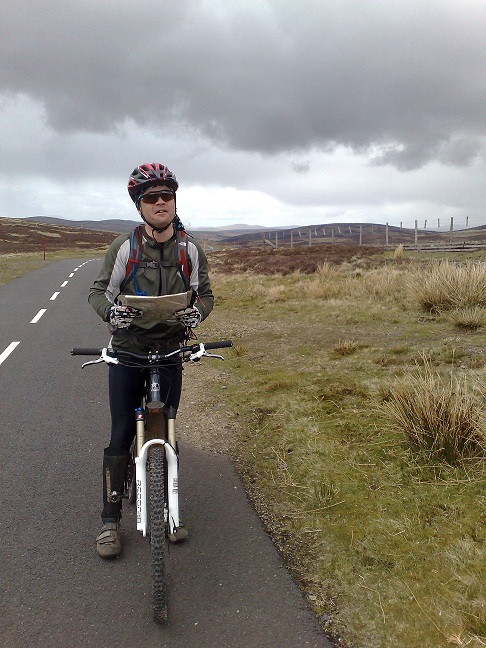 The way out is a road with a very well padlocked gate at 879131.  You can’t miss it.  It leads to the radar station, the giant Rover-like golf ball up the hill, and is probably the one road in the UK that has no potholes.  Which helped, as we were now looking at a 200m climb to the highest point of the day.  I was very thankful of the can of full-fat Coke at the tea shop as we span away up the tarmac, real top-of-the-world stuff.  The caffeine enhanced suger hit got me to the 630m point where I saw where we were heading, the home stretch, with a moaned “oh f***, no…”  The route down Enterkin Burn, following the powerlines, was a sheeptrack along what, to me, looked like a near vertical sided far-too-many-metres high gorge.  And to cap it all, at this point the wind picked up and started driving freezing rain at us at about 45deg.

We left the road and zipped down the track to 882106 where the fun really began.  The trail was now kinda tyre width and perfectly rideable, but I have a problem with exposure and really don’t want to end up in A+E again anytime soon.  With that in mind, we made our way down the descent, in turns riding, outrigging with one leg, and walking.  To be fair, apart from a couple of washed out bits, it’s all very rideable, and the views are simply unbelievable, huge perspective-gibbering slabs of hill surrounding you.  All went without incident apart from one point where I was wasn’t paying enough attention and a small ditch combined with me still not being used to the new bike, and I sailed over the front to slam shoulder-first into the turf.  No real damage, just a bit of a wrench.  Shortly after, things got a bit less intense, and we found ourselves joining a quad bike track with multiple burn crossings, all of which were great fun. 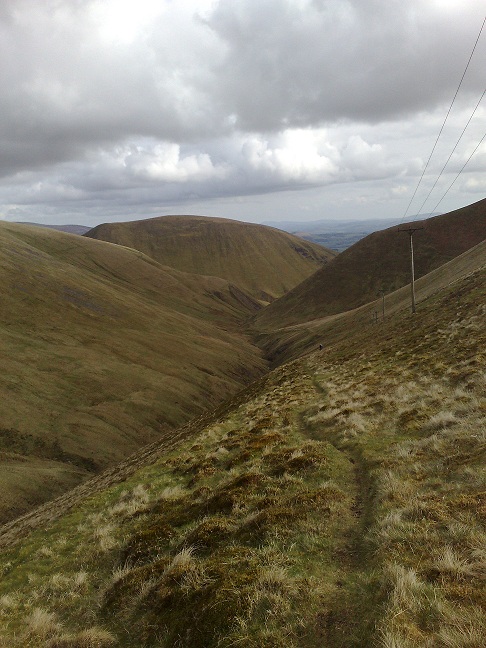 The one sketchy bit of navigation hit us after that.  Shortly after 877075 the trail split and started to fade, and we ended up free styling it across the hill.  Doing it again, I’d stay high as possible, aiming for 875055, but it worked. 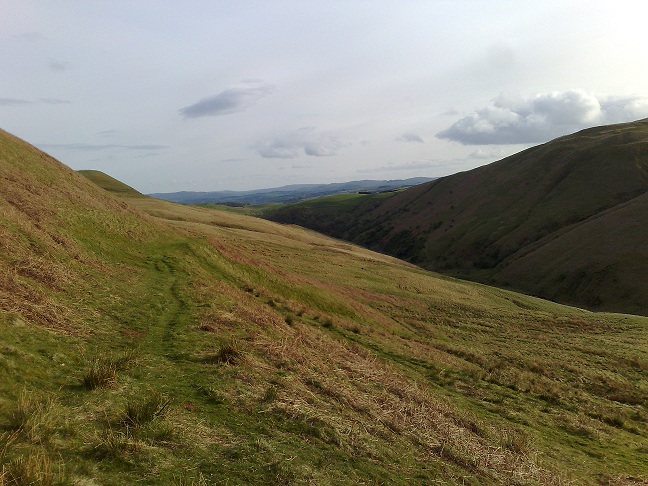 From there, the track quick was and easy, and on hitting tarmac, it was an overwhelming joy to be back in civilization.

Then it was just a spin back along the road to Drumlanrig, to find with no surprise that, at 8:30pm, ours was the last car there.  But: the toilets were still open!

Hmm, a bit more than I’ d intended to write, but I hadn’t quite intended to be riding for 10 hours, either.  I shall be filing that one under “epic”.  I think that we covered about 38 miles (which sounds pathetic!) over some fantastic terrain, some brutal climbs, a couple of descents I’ll not forget, the weather was on our side, the banter was most amusing, and I spent all day at work on Monday hurting.  Brilliant.  So who’s up for the next GMBC Big Day Out?

It’s a bit sketchy in the woods at Drumlanrig, but you get the idea, and it’s fun to check on Google Earth ;~)