As a bit of a challenge and Strathpuffer training me and Robin decided to tackle the Rob Roy Way (http://www.robroyway.com/ ) in a one-er. It seemed possible – 124km of mostly good tracks from Drymen up through the Trossachs and Bredalbane. The target was the 8:30pm train home from the finish in Pitlochry. Cheap advanced tickets were confidently purchased. We planned for a 7am start in Drymen so it would involve quite a bit of riding in the dark. 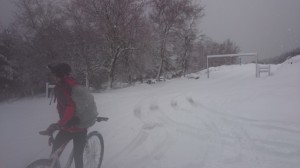 We needed to average around 11km/h including breaks to make it comfortably. A lot of the route is on good tracks, using parts of national cycle network and minor roads so this seemed like no problem. We both had an eye on the deteriorating weather forecast from a few days in advance. First it was meant to be windy and showery. Then very wet and windy. Then very wet and windy followed by heavy snow. Naturally we dismissed the amber weather warnings and decided it probably wouldn’t be that bad. Continue reading

As part of preparations for Strathpuffer myself and Robin came up with the idea of doing the Rob Roy Way. It starts in Drymen, ends in Pitlochry. It is either 77miles or 94miles depending on the route. It’s generally on good tracks so isn’t the toughest riding but should be a good chance to test lights and get some time on the bike.

Rough plan is to leave Drymen early and head to Pitlochry. We’ll either get the train or sort lifts to get back.

If it appeals to anyone come along and work up an appetite for Christmas.